SEASONS: Acceptance of a spot on a team is a commitment for two seasons: Fall season August 1– October 31; Spring Season March 1 – June 1, 2022.  We offer Winter Indoor Training Program from late December through February, as well as individual training programs and leagues at CITY HALL year round.

TRAINING: For U9-U12: 2x per week; U13-U19 Classic level: 2 x per week; U13-U19 Premier level: 3x per week. Practices are 90 minutes in length, typically on a Mon/Weds or Tues/Thurs schedule. You will be notified of specific schedules around July 15. Most teams will train at either Humana Grand Allee (game fields) or Miles Park, both within The Parklands.

LEAGUE: Most U9 – U12 will play in the KY Amateur Soccer League, which is primarily based in and around Louisville. The U9 & U10 ages play on Saturdays only, typically at Thurmin Hutchins Park off River Road. (www.kentuckysoccer.com)

The U11-19 Gold (and some Green) team will apply for the Kentucky Premier League, which requires some travel, typically within 90 minute drive. (www.kplsoccer.com)

The U13 – U19 classic levels will play in the KY Select Soccer League, which also typically requires some travel within 90 minute drive of town. (www.kssl.org). All other teams will apply for the Kentucky Amateur Soccer League, a local league. (www.kentuckysoccer.com).

COACHING STAFF: All of our coaches hold a USSF Coaching License as required.

UNIFORMS: **ONLY NEW PLAYERS ** will order Nike kits, which includes the following items: 3 Jerseys, 3 shorts, 3 pair of socks.  The cost is $157.15.   See photo below! Upon acceptance, you will receive an email with instructions for ordering. 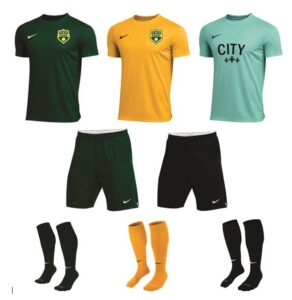